- You can click on the 'Happy 16th Anniversary' option from the [Event Manager] Aset in the Moradon map.
- You can do the quest only once with each character during the event period.
- You will receive all mission rewards when you complete the mission.
- To complete the quest, you must kill the 'Baby Dragon' creatures in front of the Moradon, El Morad and Luferson castles and collect 10 Orange-flavored Onions.
- You can receive the following rewards by delivering 10 Orange-flavored Onion items you collect to Aset.

- Magic Bag, Hellfire Dragon Wings, Oreads and Anniversary Emblem items come directly to your inventory as usable.
- You can also strengthen your character for 15 minutes by using Banana-flavored Sweet Potato, Apple-flavored Tomato and Orange-flavored Onion items that you can get from 'Baby Dragon' creatures.

Banana-flavored Sweet Potato: Increases your character's defense value by 175 and your Fire, Ice, Lightning defense by 30 for 15 minutes.

Apple-flavored Tomato: Increases the HP and Mana values of your character by 1000 for 15 minutes.

Orange-flavored Onion: Adds 10% of your attack damage and 5 to your STR, DEX, MP, INT for 15 minutes. 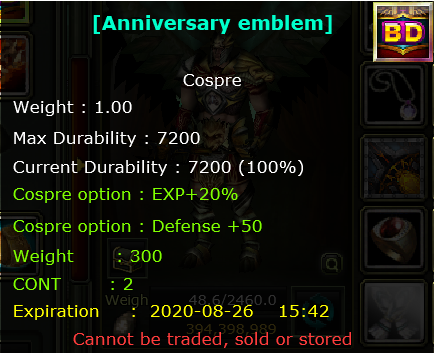 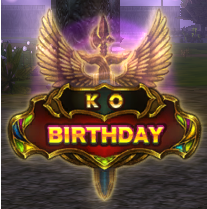 
Get ready to enter the lair of Ultima, who occupied the Bifrost map!

How to get into the dungeon?

- To enter the dungeon, you must register from the [Event Manager] Aset in the Moradon map.
- You must first click the 2nd option (Dungeon of Ultima & Exchange) in the conversation window opened with Aset, then the 1st option (Enter Dungeon of Ultima) in the conversation window and finally the 1st option (Yes, I will enter) in the window that appears.
Congratulations, you have successfully registered to enter the dungeon, as soon as you create your registration, a countdown window will appear on your screen as below, and you will be able to track the remaining time and the number of people who have entered the dungeon. 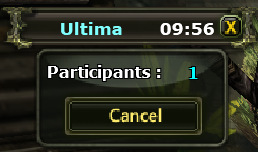 In the event area, your goal is to kill Ultima, as you can imagine, but you must destroy the two seal structures in the dungeon in order to damage the Ultima creature.


You'll realize that Ultima, who faced the raid in her own home, is much more angry than usual, from her new abilities to use to kill you.

Ultima uses an ability that centers around the person it is attacking at any time during the battle and also damages the players around it.
You can lose 30% of your health with this ability.

Ultima uses one more area ability that covers the entire map for 30% of her health.
- When Ultima's health drops to 70%, 40%, and 10%, the Destroyer Attack ability becomes active.
- Anyone damaged with this ability dies in one shot.
- In order not to take damage from the ability, all you need to do is go into safe zones by going near the escape structures that appeared before using the Ultima ability.
- You will have 5 seconds after Ultima launches the ability to enter the safe zone of escape structures.
- You will be notified by the system with a message when you use the Ultima Destroyer Attack ability.

Escape structures are two structures that can appear on 4 different sides of Ultima as soon as it launches the Ultima Destroyer Attack ability.
- Escape structures cannot be damaged and targeted.
- When escape structures emerge, a colored circle is formed around it, and the place you need to enter is exactly inside that circle.

- If any player doesn't die with the Destroyer Attack ability, Ultima goes into Lethal State for 10 seconds.
- During this period, warriors can deal 1.5 more damage to Ultima creature.
- When Ultima enters Fatal Condition, you will be notified by the system with a message.

Notes
- Players who die in the dungeon cannot receive event rewards.
- Your time for Ultima to be killed is 30 minutes.

- The player who kills Ultima with the last hit will be able to receive the 7-Day Lunar Tattoo and Anniversary Emblem rewards from Ultima's box.

Note: You have to exchange the item from [VIP Manager] Juliane in order to use the Emblem obtained from the Ultima box.


Defend against the creatures that threaten the Adonis Continent and become a hero!

- The aim of the event will be to earn Jewel by protecting your towers on the map from gradually coming creatures.
- You can die a maximum of 3 times during the event, your character will be teleported to Moradon on your 4th death.
- You will not lose any EXP when you die in the event.
- The event consists of a total of 18 stages, and warriors who successfully protect the Nexus tower are rewarded.
- If your Nexus tower is destroyed by monsters, the players in the event will be sent directly to the Moradon area.
- When you use the / town command, you will be teleported to your last tower.
- You cannot earn rewards when you leave the region before the event is completed.

How to Enter Full Moon Rift?

- You can get 3 'Full Moon Rift Vouchers' every day from Blanc in Moradon castle [Lunar Order Priest].
- Players who get Daily Vouchers cannot get more, you can get your next Voucher items the next day.
- Unused Voucher items will be deleted at the end of the day.
- Warriors can register via [Lunar Order Priest] Blanc for 1 'Full Moon Rift Voucher'.
- Leaders of the parties created with registered people can enter their party into the event area with the 'Enter' button in the Party Matching window.

- Each Knight has 10,000 HP and 500 attack power.
- Knights cannot use skills and items belonging to their character class.
- Knights can use the skills of the Chaos event as well as the new Full Moon Rift skills.

In order to use some skills, skill items must be purchased by exchanging 'Monster Coins' from Full Moon Priest NPCs in the event area.

The Daily Game of Chance

Would you like to win valuable prizes for 9,000,000 Noah?
You can win great prizes from this game of chance that you can play once a day.
You can play the game with the 'Today's Lucky Chance' option in [Event Manager] Aset!

The Traveling Merchant is at Moradon!

You can buy 10 Magic Hammers for 4,000,000 Noah from the Wanderer Merchant. To find the Traveling Trader, you have to search for him in Moradon when the system alert comes up. You can buy Magic Hammers, which can also be used with Spirit of Genie, once a day.

All missions for the 16th Anniversary have been reset! If you wish, you can repeat all quests from the beginning and earn extra experience and quest items!
The following missions are not included in this event.

Ibex and Crisis Potions Are On Sale

You can purchase Ibexs potions for 14,000 Noah, and Crisis Potions for 21,000 Noah from Potion Merchant NPCs. You can buy these potions for 1 month from the start of the event.

The True Power of Magic

This scroll, which is only used by wizards, increases your magic damage by 30% for 30 minutes. You can get magical scrolls by talking to the [Event Manager] Aset. These scrolls, which you can only buy once during the event, are for 10 uses.